Sofia opens third metro line after a year of delays 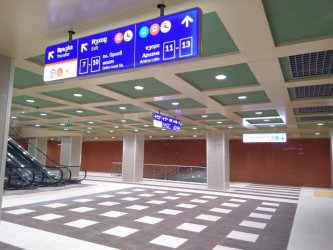 After repeated delays spanning almost a year, the third line of the Sofia Metro finally opened August 26. PM Boyko Borissov attended only virtually, announcing the metro a ‘symbol of anticorruption’. "Out metro is the most beautiful and the cheapest in Europe. An entire underground city and easy access between all key locations in Sofia. We build with the same quality as Europe but at a much lower price. This is why when anybody mentions corruption in Bulgaria – I show them the metro" Borissov wrote on his official Facebook page. Corruption is a hot topic in Bulgaria and especially for Borissov lately, as the largest antigovernment protests are nearing their 50 day since 2013. The protests demand Borissov’s, his Cabinet’s and Prosecutor General Ivan Geshev’s resignation chiefly for corruption. The director of the company, which manages the metro, Sofia Metropolitаn Sofia, Stoyan Bratoev says the line has cost 398 million euro, which makes 40 million euro per kilometer. Bratoev frequently points out this is among the cheapest in Europe. However, the low price often carries along extra costs: several weeks ago, after some heavy rain in July, Sofia Municipality decided to install an extra step at the entrance of two metro stations to prevent floods. Apparently, the draining system of the underground cannot withstand downpours – which albeit not frequent in Sofia, are bound to occur at least 5-10 times per year. The third line of the Sofia Metro began in 2016. The first stage – which is the portion of the line that is now operational – was scheduled to be completed in August of last year. Several delays followed: the date was first pushed to October, 2019, then to February 2020. Finally, the third line was opened today. The entire line links two of Sofia’s ends: Ovcha Kupel in the south-west and the Botevgradsko Shose before Vrazhdebna at the north east. Today the line opened between Krasno Selo and Hadzhi Dimitar. Източник: Mediapool.bg