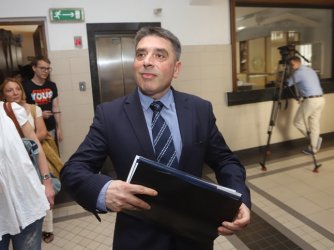 Justice Minister Danail Kirilov resigned today after a one on one meeting with PM Boyko Borissov. The move reportedly surprised ruling party GERB’s coalition partner – the far-right nationalists from NFSB: "I don’t see a reason why [Kirilov] should resign based on his work. I cannot see any substantial mishaps in his work. As minister of justice, he is doing well," NFSB MP Hristian Mitev told the Bulgarian National Radio. Evidently, GERB’s coalition partners are not the only ones surprised. PM Boyko Borissov has not given any indication he is displeased with his work. Kirilov is often the target of cartoonists and non-government friendly media for his frequent gaffs and reveals of questionable professional expertise. PM Boyko Borissov recently forbid him to post on his personal Facebook page, after he published a post depicting non-parliamentary opposition leader Hristo Ivanov to SpongeBob SquarePants. Despite this, however, Kirilov has been thought of overall as one of Borissov’s ministers whose job is far from threatened. When Borissov announced GERB’s intention to introduce a new constitution to Parliament, Kirilov said he was one of the people who personally worked on the project. The draft constitution has since been heavily criticized by experts, observers, and legal professionals for mistakes, inaccuracies as well as for further expanding the powers of the already overly powerful Prosecutor General. Borissov decided to put forward the idea for a new constitution during the second month of daily nation-wide antigovernment protests, demanding his, his Cabinet’s, and Prosecutor General Ivan Geshev’s resignations. As justice minister, Kirilov was one of the most vocal protectors of the legal framework, which gives the Bulgarian Prosecutor General unequivocal powers and makes him untouchable and unaccountable to any other institution in the country. The protests, which are now nearing their 50th day, are the largest antigovernment, anticorruption and pro-democracy protests since 2013. Protesters refuse to accept anything less (or different) than the government’s resignation, despite Borissov’s several attempts to calm the protests by sacking ministers, cash handouts to targeted groups, and the like. PM Boyko Borissov will accept or reject Kirilov’s resignation after the change undergoes a discussion between the coalition partners. Източник: Mediapool.bg