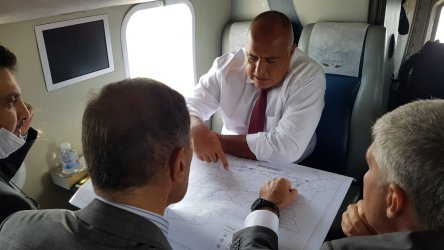 PM Boyko Borissov announced that the construction of Russian gas pipeline, which runs through Bulgaria, is at its “final stage”. The gas pipeline, known both as TurkStream and Balkan Stream (a name insisted upon by PM Boyko Borissov), will connect Turkey and Serbia through Bulgaria and is meant to deliver Russian gas to Southeastern and Central Europe. PM Boyko Borissov was touring the construction site with representatives of the Saudi company, contracted to build the pipeline, members of the Saudi government and the head of the Bulgarian Bulgartransgaz, which is the principal company of the Bulgarian section of the project. The pipeline through Bulgaria is 474 kilometers long, and all the pipes along the route have been welded, the inspection found. The structure is undergoing testing phase, which is done about halfway through, before being greenlighted for operation. This first phase of the project was scheduled to be completed back in May 2020 but the COVID-19 pandemic caused the deadline to be moved to end-of-year 2020. PM Boyko Borissov used the opportunity to attack President Roumen Radev verbally, calling on him “to come on over and see what the failed state is doing.” The two regularly feud via the media; Radev is openly critical against this government. Over the past 70 days Bulgaria has seen its most massive nation-wide antigovernment protests, demanding PM Boyko Borissov, his government and Prosecutor General Ivan Geshev resign. President Roumen Radev has voiced his support for the protests on a number of occasions and has maintained a firm view Borissov must resign immediately. He has also spoken about “getting rid of the mafia” in the Prosecutor’s Office and the government. The vicious meld between the government and shady private interests is at the heart of the protests as well. “[Radev] and other Bulgarian politicians should come and see the thousands of workers, the thousands of machines, to come and set their food down here – here in the dust and mud – and see the technical process. It is important for our fellow Bulgarians to know what effort has gone into realizing this project because very soon, all of this will be underground. Bulgaria will supply gas in all directions: North-South and East-West. We will secure Asia and Europe,” the PM said. The suggestion that Bulgaria will supply gas “in all directions” seems ungrounded though. As a fact check by Capital.bg showed – among other falsehoods or misinformation uttered by the PM during the tour of the construction sites – that the Bulgarian section of the pipeline will only run gas from Turkey to Serbia, and only in one direction. Източник: Mediapool.bg