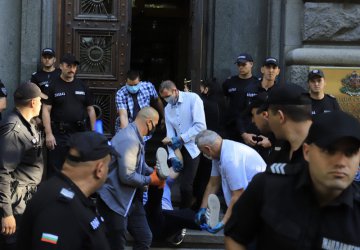 September 16 marked the 70-th day of nation-wide anti-government protests in Bulgaria, demanting the resignations of PM Boyko Borissov, his entire government and Prosecutor General Ivan Geshev. Borissov and Geshev have declared a number of times since the protests began that they do not intend to resign. The PM is rarely seen in his place of work these days, but continues to post live videos on his Facebook page, while driving his car along some road under construction in the country, bragging how much he and his government have built. In one of his recent “inspections”, as he likes to call them, he said those who want him to resign are in fact the mafia, referring to the protesters. But the pressure on the PM – not only from the streets, but from the numerous publications in Western media, and – most recently – from members of the European Parliament – is has increased, bringing the situation for Borissov way past recuperation. Mothers of children with disabilities from the civil society organization The System is Killing Us, who are among the forefront groups in the protest, went into the Parliament building yesterday and barricaded themselves inside. The women pledged not to leave until either PM Boyko Borissov or all 240 MPs resign. Some people in the group were in wheelchairs. At 18:00 National Service for Protection officers forced the women out of the building. Some women were carried out or dragged out. “They took the people out by force – kicking them, shoving them. The NSP itself recorded the operation very thoroughly – they obviously have to report the job to their superiors [..]. Our phones were smashed […]. This is a disgrace! It’s a Disgrace, [Speaker Tsveta] Karayancheva! Disgrace.” – former National Ombudsman Maya Manolova, who joined the women in the building, said. The protesters said they were not permitted to use the bathroom in the building. The National Service for Protection is a national security service, providing security detail to high level officials. It is a unit under the President of Bulgaria. The service released an official position for dragging out the protesters from the Parliament building, which said the protesters had perpetrated a building under their guard. They also said their actions were fully coordinated with the police. After the protesters were out of the Parliament building, they requested President Roumen Radev to dismantle the service. After 21:00 the protest demonstration headed to the iconic Eagles’ Bridge after that. Източник: Mediapool.bg