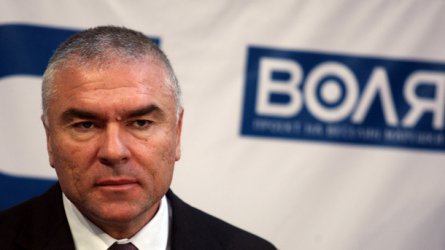 The Deputy Speaker of Parliament and leader of VOLYA Vesselin Mareshki was found guilty of extortion and black mail by a second instance court yesterday and sentenced to four years in prison. Krassimira Koleva, named as his accomplice, received a three and a half sentence on the same counts. According to the indictment, between October 9 and November 16 2014, Mareshki and Koleva blackmailed and extorted entrepreneur Asen Milanov to pay them 10’000 leva monthly rent for the space of his pizza restaurant in Varna. Milanov is Koleva’s ex-husband. The prosecutors in the case claim that after Koleva failed to secure ownership of the business, she had resorted to alternative means with the help of Mareshki. Koleva and Mareshki’s connection is through a loan: apparently Koleva owned Mareshki 65’000 leva. The indictment states that the motive for Mareshki’s involvement is to be able to receive his money back. According to the prosecutors’ case, Mareshki and Koleva threatened the pizza restaurant owner that unless he pays the amount they asked, they would destroy his business. After Milanov refused to pay the 10’000-monthly fee, asked by Mareshki and Koleva, the two retaliated through administrative pressure: inquires, checks, power cuts and the like. Milanov asked a member of the municipal council, Kostadin Kostadinov, for help in resolving the matter. Upon finding out, Mareshki attacked Kostadinov on the street, which led to the former’s arrest and assault charges. Mareshki and his lawyers will likely appeal the sentence to the Supreme Court of Cassation. They maintain the defendant’s innocence and reject the claims that Koleva and Mareshki had any financial relations. “[These rulings are] interim. The important thing is what the third instance court will rule” – Mareshki told NOVA TV. “For most of the unbiased viewers, it is clear that I am innocent,” he added. Mareshki also suggested in the same interview that he was used as a scapegoat and the reason for the verdict is the upcoming report by the European Commission about the rule of law in Bulgaria. “The moment is picked very precisely, in order to demonstrate to Brussels that Bulgaria has a convicted politician, albeit not by a last instance court, and to show that the justice system is independent,” he said. VOLYA provided the crucial votes earlier this month to ruling party GERB to be able to introduce to Parliament a new constitution. PM Boyko Borissov announced GERB had been working on a draft of a new fundamental law in the midst of the largest nation-wide antigovernment protests in the past seven years. Mareshki initially criticized the idea and was adamant his party’s MPs will not provide signatures to allow GERB to table the draft constitution formally to Parliament. But, surprisingly, at the last minute, Mareshki reversed his position. Coincidently, the same day, Parliament voted to grant a former VOLYA MP a 20-year concession contract for the beach Kobakum North 2. Източник: Mediapool.bg