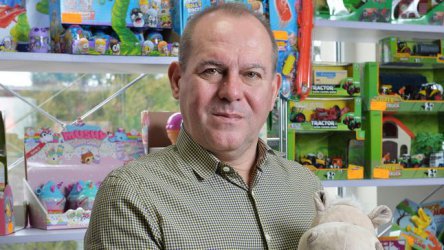 A massive raid by several state authorities against the Bulgarian toy store chain Hippoland (Хиполенд) began Friday morning and concluded at the end of the day, likely due to increasing backlash from the public. The tax authority, the other financial institutions involved and the police closed the day-long active probe, having found a discrepancy of 9,60 leva (about 5 euro) in the books. The raid came a day after Hippoland’s owner and CEO Marian Kolev published a highly critical Facebook post against the government and the police. Kolev’s post was prompted by and detailed how his 17-year-old was almost blinded after being peppered sprayed by police forces while peacefully protesting the previous day, September 2, which marked the most massive antigovernment protests since they started 56 days earlier. Kolev and Hippoland employees have openly supported and participated in the nationwide antigovernment protests, which are now almost in their 60th day. Employees are often seen wearing Hippoland t-shirts during demonstrations as well. Meanwhile, a member of the non-parliamentary anticorruption opposition Democratic Bulgaria, Ivo Mirchev, posted a video, taken at a Hippoland store yesterday, to express his discontent. In the video, Mirchev claims media mogul and DPS MP Delyan Peevski had tried to buy Hippoland from Marian Kolev through a proxy but Kolev had declined. This, Mirchev claimed, was one of the reasons for the raid: retaliation against Kolev for taking part in the protests, but also for declining to sell the business.   Besides having acquired most of the news outlets in Bulgaria, which caused Reporters Without Borders to name him personally as the prime reason for the rapid decline of press freedom in the country, Peevski owns an array of other businesses. In June, the NGO Anticorruption Fund published a multi-part investigation of a well-coordinated attempt by Peevski with the help of key state authorities to seize a successful Bulgarian escalator business. Apparently, Bulgaria was looking at receiving large sums through Euro funds for escalator renovations, and such companies would be able to win public contracts for their execution. This was one of the more detailed cases, but many other instances of Peevski or proxies undertaking similar acquisitions have also been reported on, leaving little wonder as to Mirchev’s claims. When the Ministry of Interior finally announced it had discontinued the operation at the end of the day on Friday, it was careful to highlight that the actions, taken by authorities were planned beforehand, implying it was entirely disconnected from the protests and the alleged appetites of Peevski’s to acquire the toy store chain. In show of support, many protesters on Friday held up stuffed toys, while people of social media were posting photos from shopping sprees in Hippoland, calling on others to head out to the nearest store and buy something. The hashtags #азсъмхиполенд (#iamhippoland) and #всичкисмехиполенд (#weareallhippoland) emerged and quickly gained traction on social media. Източник: Mediapool.bg