DPS will not support Borissov’s new constitution, rendering it impossible to pass in Parliament 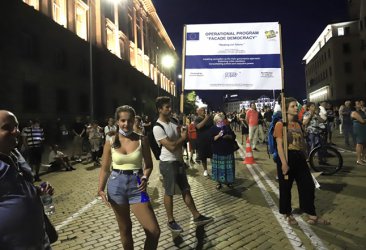 In the 54 day on nation-wide anti-government protests, the leader of the Movement for Rights and Freedoms (DPS), Mustafa Karadaya announced the party’s MPs will not support PM Boyko Borissov’s proposal for a new constitution. If they follow through, this would mean the project for a new constitution and ruling party GERB’s idea for convening a Grand Assembly to adopt a new constitution – cannot receive the necessary support from MPs to move forward. Borissov declared his party had been working a new constitution in the midst of the largest nation-wide anti-government protests since 2013. Protesters are demanding Borissov’s, his entire government’s and Prosecutor General Ivan Geshev’s resignation for large scale and deep-rooted corruption. This is Borissov’s third term as Bulgarian PM and the exclusion of a two-year government led by the Bulgarian Socialist Party, Borissov’s GERB has been governing the country for over a decade. The proposed texts were widely criticized by legal professionals, political opponents, and observers alike. In terms of its purely legal qualities the new constitution, legal experts said, was chockfull of contradictions, inconsistencies and various mistakes. The text even contained spelling errors. It also introduced the perplexing new provision for the Prosecutor’s Office and justices to have legislative initiative. From a political perspective, the move was heavily criticized as the consecutive and larger than life attempt by Borissov to try out numerous tactics aimed at buying time and ignore protesters demands to step down. Overall, the new constitution at the end was mostly seen as a tool to buy some time, and nothing more. Although, it did contain the risk it would get the necessary votes and procedures will commence for convening a Grand Assembly, which, in theory, would have secured Borissov’s power temporarily but – also – indefinitely. With DPS’s announcement it seems Borissov’s constitution will ultimately die before its actual introduction to Parliament. The prop-constitution did serve at least partially its purpose. It took away some of the public and media focus from the resignation demands. Now, a day before Parliament’s first day after summer break, Borissov will have to contemplate his next move. Lack of support from DPS, who otherwise tend to provide key support for GERB for their legislative initiatives, especially for more crucial projects, means almost certainly the constitution’s days are numbered. Borissov must now plan his next move: the failed attempt might give Borissov the necessary justification to resign and claim it was not the protests that made him step down but lack of support from Parliament on a project he maintains is essential for the future of the country. Or he might have something else to take the attention off the protests. Protesters have already pledged to meet MPs on their first day back. A massive protest is scheduled for 8:00 in the morning in front of Parliament, likely to be one of the most massive yet.               Източник: Mediapool.bg