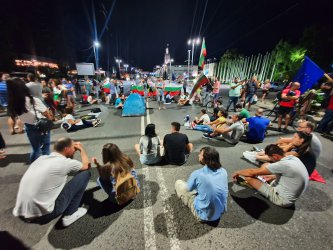 The governor of Sofia City Province, Ilian Todorov of ruling party GERB took to Facebook to express his displeasure with protesters. Discussing the recent escalation in one of Sofia’s intersections earlier this week, Todorov called protesters ‘freaks’ and ‘an intoxicated mob’. The incident sparked controversy as a woman drove through the protest with her husband and her two small children in the back. Her windshield was ultimately smashed as a result. Prosecutors charged two people for the incident. In his Facebook post Todorov describes protesters’ actions as “a brutal act of terrorism, nastiness and defiling of everything that is sacred” “The angry intoxicated mob tried to lynch a mother and her two children, and almost succeeded. The ‘beautiful’ and the ‘smart’ shoved their smart and beautiful fists. Then they yelled and swore. They are the supposed carriers of the new morals and politics… violent and ferocious toads.” Opposers of the antigovernment and anticorruption protests refer to protesters as “the smart and the beautiful” ironically since the mass protests of 2013. Meanwhile, the police demolished part of the tent protests in Plovdiv in the middle of the night, at 4: A.M. One of Plovdiv’s bridges was occupied by protesters this Thursday. Protesters blocked traffic with tires, tents, trash containers and the like. The police raided the site and removed the blockades. The protesters pledged to take their protest to the local police station. The municipal government had refused a formal request made earlier by protesters to hold a demonstration along the main streets of Plovdiv. The official reason for the rejection was incomplete documentation. In Sofia, early Friday morning protesters blocked the building of the Bulgarian National Television. The anti-corruption civil organization BOEC, which frequently organizes protest events, marked its fourth surprise blockade in a row over the past days. BNT is a regular stop for the current anti-government protests for its very limited coverage of the protests and pro-government bias. BNT is heavily criticized for becoming a pro-government media ever since Emil Koshlukov – a figure close to media mogul Delyan Peevski – assumed the role of the networ’s Director General. Delyan Peevski is named by Reporters Without Boarders as the main force behind the rapid decline of press freedom in the country. Източник: Mediapool.bg