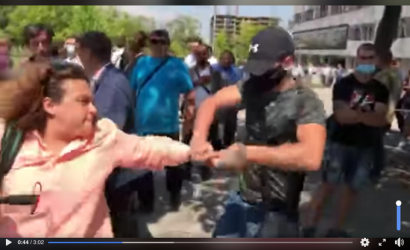 Ruling party GERB held a ‘national conference’ yesterday in Sofia with party members from across the country. The conference itself did not produces much news. GERB leader and PM Boyko Borissov held a lengthy speech in front of a crowd, seated beneath a scorching noon sun in what was one of the hottest summer days yet. Critics and observers of the government and the PM described the event as lacking any sense if not to boost the PM’s self-image in the 27-th day of nation-wide anti-government protests, while his poll numbers have plummeted to an all-time low. While reporting on the event, Svobodna Evropa (RFE/RL) journalist Poulina Paunova was assaulted and her phone thrown several times by a GERB sympathizer. The young man, part of a group who hid their faces and appeared as provocateurs, were let inside the premises of the event by security.   The incident was condemned by the Association of European Journalists, the national electronic media regulator, the Council for Electronic Media, NGOs and other media organizations. Reporters Without Borders tweeted in support and called on Bulgarian authorities to ‘investigate and identify the perpetrators’. To date, there has been no institutional response regarding the assault. This attack comes after a smear campaign provoked by the publication by the Prosecutor General @IvanGeshevPG's press office of a declaration accusing @RFERL reporter Boris Mitov of manipulations and questioning his professionalism. An abuse of power that @RSF_inter condemns. — RSF in English (@RSF_en) August 6, 2020 Meanwhile, protests are continuing to happen daily in all major and most other Bulgarian cities; three key intersections in the center of Sofia are blocked 24/7. Many demonstrations with Bulgarians living abroad are taking place in major European cities as well. Protesters demand the resignation of the PM, the entire Cabinet and the Prosecutor General Ivan Geshev. PM Boyko Borissov hinted during the conference that he intends to propose to his coalition partners for him to resign and the government to carry on and appoint a new PM. This did not strike a particular cord with the protesters, who stand firm in their demand for the whole government to step down. A day later, one of the coalition partners said neither the Cabinet, nor Borissov will be resigning at all. Mere hours before, Vice PM Tomislav Donchev said the government might resign in September. This does seem more plausible, especially in conjunction with another curious shuffle at the top of the government, which happened yesterday morning, before the national conference. The head of PR of the Cabinet resigned “to take over election preparations at GERB headquarters.” The move was interpreted by many observers as indicative of GERB’s apparent intention not to carry out its full term, which would normally end next year. The government also just decided to increase the salaries in a large chunk of the public sector by a whooping 30%, while the country’s economic outlook due to the COVID-19 crisis is looking grim. Less than a week ago, the government announced massive social gifts masked as coronavirus economic relief measures, including millions of one-time cash handouts. These and other similar moves by the government, which intensified significantly over the past weeks, have prompted many observers to read them as emergency image boosting to target electorate in case of snap elections. Източник: Mediapool.bg