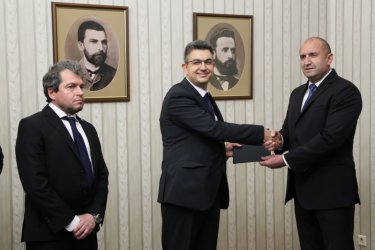 The party There Is Such a People, which won the July 11 elections by less than a percent of the votes, did not reveal the name of their PM nominee until they had to receive the mandate from the president. Plamen Nikolov holds a PhD in philosophy of law and has worked as a general manager of the swimming gear brand Finnis. Right up until early Friday afternoon (the PM nominee was due at the presidency at 5:00PM) the long time show host, singer-songwriter and producer Slavi Trifonov’s party unofficially let out some information that the PM candidate would be Petar Iliev, an associate professor of law at Sofia University. According to sources, his name was pulled at the last minute by Trifonov, as the ceremony at the presidency was approaching. Trifonov denied the claims in a Facebook post: “(..) Plamen Nikolov was chosen two weeks ago. Everything else are speculations, fiction and journalistic guesswork.” The president handed the official mandate to the PM candidate to try and form a cabinet, which Parliament would have to pass. If it doesn’t the cycle repeats with the next party in line. No more than three attempts at forming a government could be given, if all of them fail to receive enough votes in Parliament (121 of 240 votes), the country will go through another round of snap elections. “The people voted for you with the expectation to consolidate the front of change against the failed corruptive model of power. It is time for them to find out how and with whom”, the president said. “I believe and I am certain that you realize this. The Bulgarian people await your nominations for a cabinet (…)” he added. Likely, the president stressed this point likely not on coincidence. Just as TISP concealed the name of the PM nominee until the proper procedure didn’t allow for the person in question to remain unknown, the party – and the PM candidate – refuse to name any names in the Nikolov’s cabinet proposal. Nikolov told reporters if he and his cabinet are approved, they have five priority areas of work: the recovery and sustainability plan, the COVID-19 crisis, recalculating the pension rates, changing the election system (Trifonov has long stood for changing Bulgaria’s elections system from proportional to majoritarian); “the judicial reform is especially important for all of us”, he closed. The deputy chair of TISP Toshko Yordanov said his party relies on the other two so-called protest-parties Democratic Bulgaria and Rise BG! We’re Coming for support. But both DM and RBGWC expressed some disappointment at the way the events had unfolded. DM called for “the show to step back and allow room for politics”. “Obviously, we do not know him. He seems likable but at this point I don’t see what we can comment on. We will wait and see how the [rest of the cabinet nominations] will be presented, how its program will be presented. We won’t rush with our comments. It seems all of this ordeal is a little sad for country,” DB co-leader Hristo Ivanov told reporters. Borislav Sandov of BD was harsher, calling the decision to nominate “a person with no clear political profile, having no political position” crude. He also alluded to Trifonov’s experience as a show host and producer for the way he and his party act. RBGWC overall approved of Nikolov’s CV but are yet to decide whether they approve his candidacy for PM. The Bulgarian Socialist Party have said they would be inviting the candidate for a meeting before deciding on his nomination. Former ruling party GERB and the Movement for Rights and Freedoms (DPS) have not yet commented on the candidate. Both DB and RBGWC insist on signing bilateral agreements with Trifonov’s party for setting certain policy objectives. TISP, however, seems reluctant at the idea. Източник: Mediapool.bg