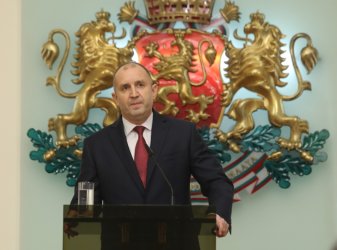 President Roumen Radev confirmed yesterday that he will be running for a second term in office. The president has been gaining momentum over the past year by openly supporting the mass antigovernment protests in the country during the summer and attacking PM Boyko Borissov and members of notorious protected elites. After Radev took a firm position against Prosecutor General Ivan Geshev and Boyko Borissov’s government, the president became a target of Prosecutor’s Office probes, which were sometimes borderline arbitrary. Radev ran as an independent the first time around – as he will again – but did, however, receive the support of the Bulgarian Socialist Party. The latter, successor of the former Bulgarian Communist Party, is an avid supporter of large Russian energy project in Bulgaria and an enthusiastic promoter of Russian influence in general. Radev has been largely seen as an extension of this partiality. But in announcing his bid for a second term as president, Radev made two decisive gestures, apparently aimed to disassociate himself from the image of pro-Kremlin politician. One was taking a stand regarding the arrest of Alexey Navalny, albeit not in very definite language. PM Boyko Borissov criticized Radev for failing to issue any kind of statement on the matter. Radev answered yesterday that “if Navalny was a Bulgarian, he would have investigated the nights stands”. The “night stands” in question show stacks of 500-euro bills, a couple gold bars and a gun in what appeared be Borissov’s night stand. The photos leaked earlier in 2020, some – not showing the night stands – were confirmed by the PM as authentic. Regardless, the Prosecutor’s Office has not investigated the matter: neither as an attack against the PM – assuming the photos are fake – nor as evidence, and also as a severe security breach  – if they are authentic. Radev also criticized Borissov for his decision to allow the construction of the Turk Stream through Bulgaria. “When will we see a real economic justification and the true price of this project, into which three billion of our money got sunk? Which was noisily publicized as an extension of our national gas pipeline network but at the same time has not a single deviation towards Bulgarian regions in desperate need of gasification. When will Borissov give a clear guarantee that this [investment] will pay off?” Radev is one of the few high-level political figures in the country, who is not associated with any corruption scandal or scheme. This gives him an edge in the race but its viability highly depends on ruling party GERB’s nomination as well. Източник: Mediapool.bg